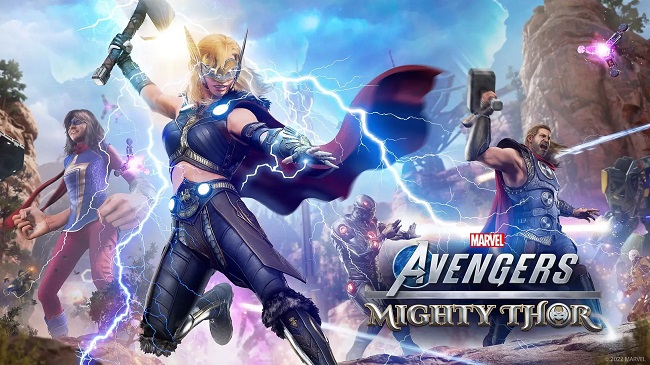 The Mighty Thor: Jane Foster comes to Marvel’s Avengers today in update 2.5 along with several bugs fixes and improvements. I guess adding The Mighty Thor is to tie in with the film Thor: Love and Thunder due out in a couple of weeks which also features The Might Thor….

COMIC BOOK ORIGINS
Who is Jane Foster? Jane is a doctor of many gifts driven by compassion for others. The story of Jane’s transformation into the Goddess of Thunder originates from the iconic comics written by Jason Aaron. She first appeared as the Goddess of Thunder in issue #1 of 2014’s Mighty Thor. After Thor Odinson becomes unworthy to wield Mjolnir, it sits dormant on the moon. Many try to pick up the legendary hammer, but none are deemed worthy. That is until Jane, who is battling cancer, hears Mjolnir calling out to her. Upon wielding the awesome weapon, she transforms into the Mighty Thor, and her illness is held at bay.

Jane’s adventures continued in 2015’s Mighty Thor Series and 2019’s War of the Realms, culminating in the epic conclusion of her arc when she transcends mortality and is reborn as Valkyrie.

MARVEL’S AVENGERS LORE
In Marvel’s Avengers, Jane – the Mighty Thor – is torn from an alternate timeline through a rift in space-time caused by Tachyon Anomalies. In her original timeline, Jane became the Goddess of Thunder when she took up the mantle from Thor, who in his grief gave up Mjolnir after the A-Day tragedy and Jane’s cancer diagnosis.

Jane Foster is voiced by the talented Zehra Fazal, known for her voice work across video games (Apex Legends, Borderlands 3, Destiny 2) and television (She-Ra and the Princess of Power, Big Hero 6: The Series, Lost in Space). In addition to collectable intel documents and character banter, the Mighty Thor’s story is told through our brand-new animatic Marvel’s Avengers – The Mighty Thor: Out of Time illustrated by veteran Marvel artist Takeshi Miyazawa.

GAMEPLAY & UNIQUE SKILLS
As you’d expect, Jane’s Mighty Thor possesses all the strength and power of a God of Thunder. Long years of watching Thor Odinson have allowed the good doctor to use Mjolnir with ease. However, Jane doesn’t wield Mjolnir like a son of Asgard, but with human touches all her own, deploying the mighty hammer in ways the Odinson never did.

All Mother’s Blessing and God Tempest can be modified with Mastery skills to boost damage, increase the strength of shockwaves, and improve Intrinsic generation and duration.

In her comic runs, Jane frequently shows more finesse with Mjolnir than the Odinson, and that shines through in several new features in her combat kit. This includes Quick Fire, a new ranged attack combo that allows the Mighty Thor to make a second more powerful ranged attack by timing her next throw as she catches Mjolnir on its return.

ne’s abilities, such as her Ranged Power Attack, also draw their inspiration from the epic combat in the comics. A notable example of this is the Seek and Pin upgrade to her Ranged Attack, which empowers Mjolnir to seek out and pin enemies without needing to aim.

Her expert control even extends to melee strikes with Earth’s Finest, which adds a hammer toss to her light attack combo for extra reach. Jane also puts her own spin on classic Odinson moves like Headstrong. She relies on her Thunderkick – a brutal front kick – to send enemies flying.

The Mighty Thor’s kit culminates in The All-Weapon, her brand-new Ultimate Heroic. Drawn from the pages of her Thor and Valkyrie runs, Jane sends Mjolnir to seek and destroy nearby enemy targets. Meanwhile, she calls forth the All-Weapon Undrjarn to protect her, reducing all damage taken while smiting her foes.

The All-Weapon has a full set of specializations and allows you to customize Mjolnir’s strikes, making them faster and channeling a powerful shock status against nearby enemies. Jane can even use Mjolnir as a personal orbiting defense shield.

The arrival of the Mighty Thor adds a third flying warrior to the Marvel’s Avengers roster for new team compositions and fresh co-op play. This allows for original approaches to community events, end-game Omega Level Threats, and Raid challenges. 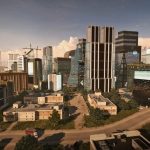 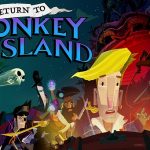